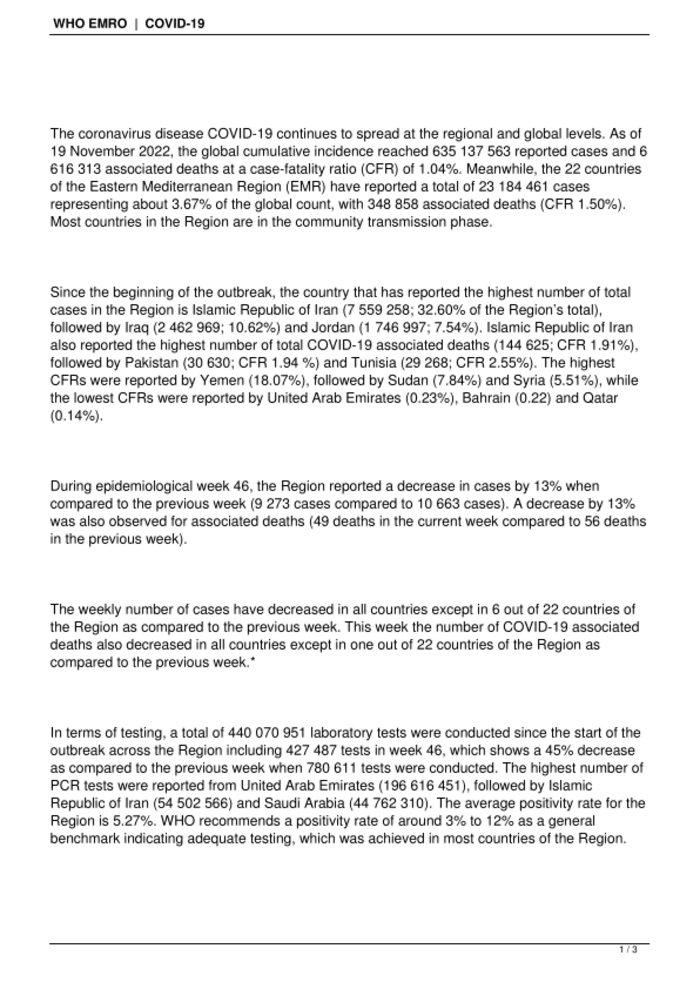 The coronavirus disease COVID-19 continues to spread at the regional and global levels. As of 19 November 2022, the global cumulative incidence reached 635 137 563 reported cases and 6 616 313 associated deaths at a case-fatality ratio (CFR) of 1.04%. Meanwhile, the 22 countries of the Eastern Mediterranean Region (EMR) have reported a total of 23 184 461 cases representing about 3.67% of the global count, with 348 858 associated deaths (CFR 1.50%). Most countries in the Region are in the community transmission phase.

In terms of testing, a total of 440 070 951 laboratory tests were conducted since the start of the outbreak across the Region including 427 487 tests in week 46, which shows a 45% decrease as compared to the previous week when 780 611 tests were conducted. The highest number of PCR tests were reported from United Arab Emirates (196 616 451), followed by Islamic Republic of Iran (54 502 566) and Saudi Arabia (44 762 310). The average positivity rate for the Region is 5.27%. WHO recommends a positivity rate of around 3% to 12% as a general benchmark indicating adequate testing, which was achieved in most countries of the Region.

Supporting countries in the Region

The regional incident management support team continues to coordinate the response and provide technical support to countries and partners in the Region in the areas of coordination and partnership, surveillance, laboratory capacity, clinical management, infection prevention and control, risk communication and community engagement, points of entry according to the International Health Regulations (2005), research, health systems, and essential health services among others.

For more data from the Region, please visit the COVID-19 dashboard.

*Reporting on weekly relative difference instead of cumulative difference to better reflect the extent of the COVID-19 pandemic as we witness a decline in reported cases. This decline could be partially due to the change in the frequency and quality of data being shared by some countries as they moved to reporting through weekly aggregated data.

**The data on vaccination is obtained from a number of sources including media reports and country websites for ministries of health.