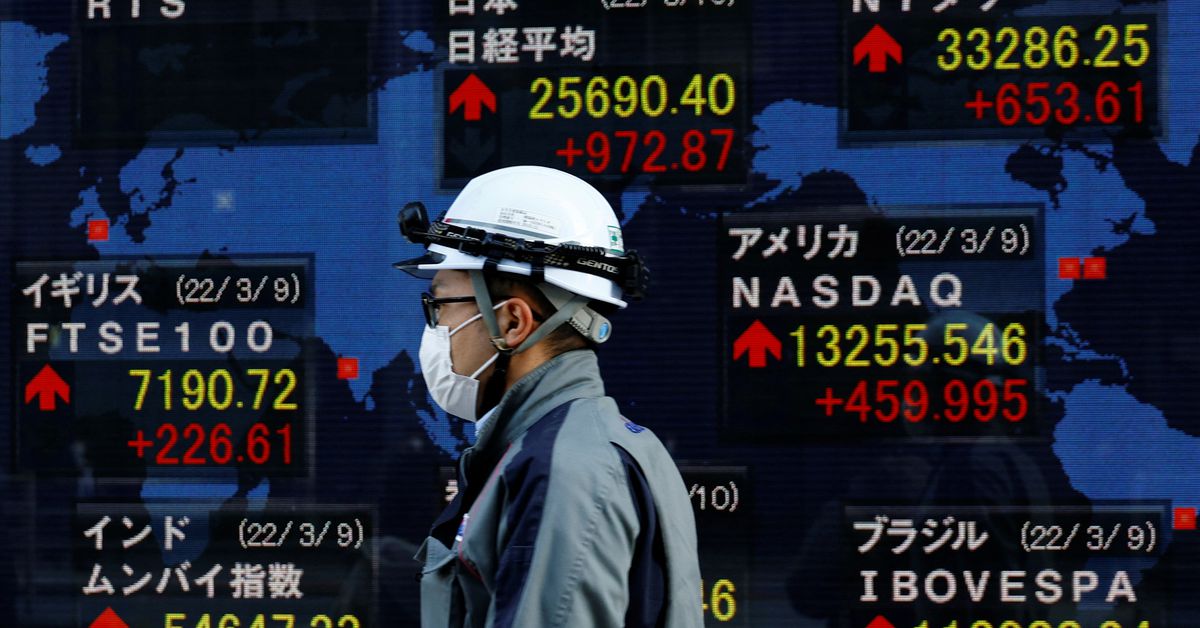 TOKYO, Nov 25 (Reuters) – U.S. long-term Treasury yields sank to a more than seven-week trough on Friday while the dollar drooped near recent lows against other major currencies peers as markets continued to digest dovish signals from the Federal Reserve.

Expectations of a less aggressive pace of U.S. monetary tightening from as soon as next month continued to support some stock markets in Asia, but Hong Kong’s Hang Seng dropped sharply as record COVID-19 infections in China dimmed the outlook.

The 10-year Treasury yield dipped to 3.659%, the lowest since Oct. 5 in Tokyo trading, after Thursday’s U.S. Thanksgiving holiday. The two-year yield slipped to a one-week bottom at 4.44%.

The dollar index , which measures the greenback against the euro, yen and four other rivals, hovered not far from Thursday’s low of 105.62, and last stood at 105.86.

A “substantial majority” of Fed policymakers had agreed it would “likely soon be appropriate” to slow the pace of interest rate rises, minutes of their latest meeting showed on Wednesday.

Futures markets show investors now see U.S. rates peaking just above 5% around May, and are pricing in roughly two-thirds odds that the Fed slows to a half-point hike on Dec. 14 from a string of 75-basis-point increases.

“Having seen the way the market has reacted – equities rally, bond yields fall and the dollar weakens – if I was the Fed, I’d be thinking I had better go and say something really hawkish now, because otherwise the last 75 basis points of tightening I’ve done are basically pointless, and the next 50 are just going to be swallowed up by the market going, ‘Don’t worry about it, the pivot is coming’,” said ING economist Rob Carnell.

“You want your rate hikes to mean something, so I think once everyone has digested their turkey and gotten back to work – probably early next week – we’re going to hear some pretty hawkish stuff coming out of the Fed.”

Asia-Pacific share markets were mixed, with Australia’s benchmark (.AXJO) managing a 0.35% rise, but a tech-led selloff in Hong Kong shares weighing on sentiment in other parts of the region.

“Investors are right to be worried,” said ING’s Carnell. “They still in China don’t have the adequate health network that they would be able to deal with a full-on outbreak with lots of people getting sick.”

Oil rose slightly, paring a little of this week’s losses, which have been driven by worries about Chinese demand and expectations a high price cap planned by the Group of Seven nations on Russian oil will keep supply flowing.

U.S. West Texas Intermediate (WTI) crude futures jumped 35 cents, or 0.5%, from Wednesday’s close to $78.32 a barrel. There was no WTI settlement on Thursday due to the U.S. holiday.

Both contracts were headed for their third consecutive weekly decline, on track to fall about 2%.