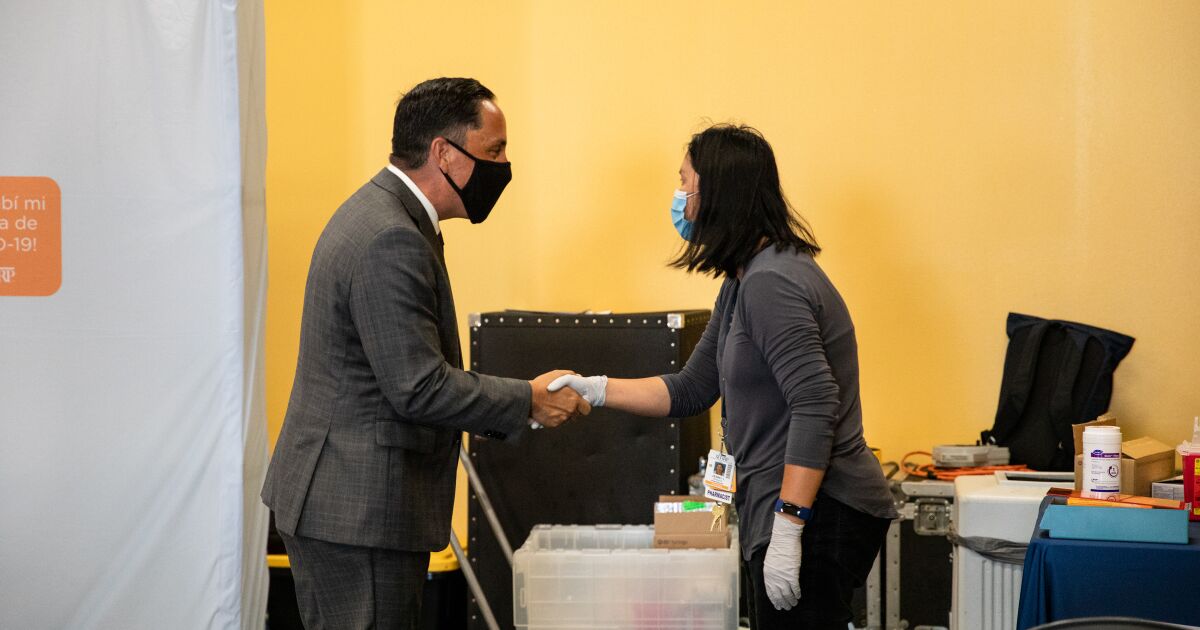 San Diego has repealed a controversial COVID-19 vaccine mandate for city workers that had led to multiple lawsuits, the firings of 14 employees and resignations by more than 130 police officers.

The council simultaneously voted to lift the city’s COVID-19 state of emergency declaration next month, following a similar move by the state that Gov. Gavin Newsom announced in October.

Both the city and state emergency declarations will expire Feb. 28.

Because the council must approve the repeal of the vaccine mandate a second time at a subsequent meeting, it won’t officially expire until March 9 — 30 days after the second vote.

City officials said lower recent case rates show that vaccines have been effective and that the city’s mandate was a smart and effective policy.

Numbers of confirmed COVID-19 cases have declined nationwide as public testing centers have closed and as more Americans have turned to rapid at-home tests, whose results are typically not reported to public health authorities.

However, San Diego County’s case rates spiked over the holidays, as officials had expected, and have since declined. Wastewater surveillance — a more accurate gauge of local COVID-19 activity, amid drops in testing — shows levels remain elevated from a relative lull in the fall.

On Tuesday, the labor union representing the city’s roughly 2,000 police officers offered a different take from city officials. The union hailed the repeal of what it called a “shortsighted” policy that it said had led to higher crime rates and slower response times to emergencies.

“It resulted in a crippling staffing crisis with the loss of over 130 officers who refused to forsake their personal beliefs, choosing instead to leave the department,” said Jared Wilson, president of the San Diego Police Officers Association. “The mandate pushed other officers to retire early and hampered recruiting.”

ReOpen San Diego, a group that opposed the vaccine mandate and many COVID-19 restrictions, said Tuesday the repeal was a positive step. But the group said it still plans to pursue a court order preventing San Diego from mandating vaccines in the future.

The group said it believes Tuesday’s move by the city was prompted by ReOpen San Diego’s ongoing federal lawsuit against the city over the vaccine mandate. City Attorney Mara Elliott updated the council on the suit two weeks ago in a session closed to the public.

Elliott, Mayor Todd Gloria and Councilmember Marni von Wilpert issued a joint statement saying that the city’s policy shifts were prompted primarily by what they characterized as sharp reductions in COVID-19 cases.

“We will continue to treat COVID-19 with the seriousness it demands, but for now we are pleased by the success of our efforts to protect the health and safety of our employees and the public.”

When the vaccine mandate was implemented in November 2021, the COVID-19 case rate in the county for residents who were not fully vaccinated was three times higher than for fully vaccinated residents, city officials said.

The hospitalization rate was six times higher, they said.

Current boosters target the Omicron variant that has been dominant since early last year. Nationwide, the risk of infection is three times lower for people who have had that bivalent booster, and the risk of dying is more than 18 times lower, data from the Centers for Disease Control and Prevention shows. But fewer than one quarter of eligible San Diegans have had it.

City officials said 91 percent of the city’s more than 11,000 workers have had their primary vaccine series. Roughly 1,000 workers were granted exemptions for religious or medical accommodations.

City spokesperson Nicole Darling said Tuesday that the 14 city workers who were terminated for refusing to get vaccinated are welcome to apply for city jobs.

Wilson, the police union leader, suggested the city’s repeal might have been partly prompted by a separate lawsuit over the vaccine filed by a group called Protection for the Educational Rights of Kids.

Wilson said the timing of the vaccine mandate was particularly bad for police recruiting, retention and morale because it followed a national uproar in 2020 over police misconduct prompted by the in-custody murder of George Floyd in Minneapolis.

“The cost of the city to implement this shortsighted policy is not just measured in the loss of valuable employees, but also in the millions of wasted taxpayer dollars spent implementing the mandate, loss of experienced employees, the cost to train their replacements, and money spent in litigation,” he said. “There might have been good intentions, but there’s no evidence the city’s vaccine mandate stopped a single person from getting COVID.”