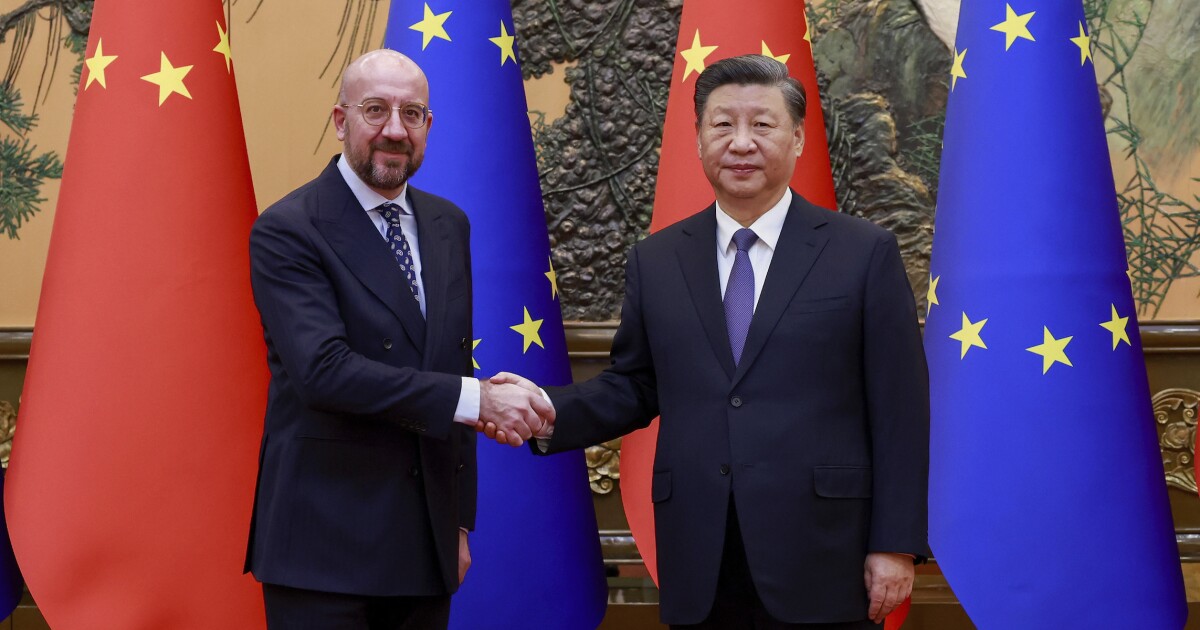 An outbreak of student-led protests across China has sent a sharp message to Chinese General Secretary Xi Jinping and the broader population, according to analysts and some dissidents.

“We haven’t seen that since 1989,” said American Enterprise Institute nonresident fellow Michael Mazza, referring to the Tiananmen Square protests. “The fact that this could happen in an environment in which the tools of government surveillance and control are so much more pervasive and effective than they were in 1989 is a really striking and really interesting development.”

Those surveillance mechanisms also allowed Chinese security forces to identify many of the protesters, easing the regime’s task of deterring additional displays. Yet Xi seems to have recognized the need for a course correction, judging from leaks from his meeting on Friday with European Council President Charles Michel.

“And the response we got from the president was explaining why there was protests, claiming that after three years of COVID he had an issue because people were frustrated,” a senior European Union official told the South China Morning Post. “It was mainly students or teenagers in university.”

Those minimizing remarks were understood as a sign that Xi plans to ease somewhat the coronavirus restrictions, without apparent fear that such a concession will incentivize additional protests. Yet some of the protests have called for more substantial political reforms, while the simple phenomenon of the protests already has begun to embolden Chinese nationals fearful of crossing the regime.

“So now we know,” Hu Guo, a Chinese man studying at the University of North Carolina, Chapel Hill, told Radio Free Asia. “The desire of the Chinese people for freedom and democracy has never gone away. It has just been suppressed by the Communist Party’s brutal stability maintenance system and by internet censorship.”

Hu was inspired to begin expressing his displeasure with the Chinese Communist Party by the sight of Peng Lifa, who draped banners that denounced “dictator and national traitor Xi Jinping” and called for an uprising.

“We need food, not COVID tests. We want freedom, not lockdowns,” said the now-vanished Peng’s banners, unfurled just before the 20th National Congress extended Xi’s tenure at the top of the regime. “We want dignity, not lies. We need reform, no cultural revolution.”

Xi’s immunity to such outbreaks could face a stiffer test if he does in fact ease coronavirus restrictions, a move that will bring the risk of a surge in coronavirus cases. Yet the triumphalist regime also refused to make use of Western vaccines, while the less-effective Chinese vaccines have not been popular among Chinese people.

“I still think we’re far short of anything that threatens his hold on power or the Communist Party’s hold on power,” Center for Strategic and International Studies senior adviser Scott Kennedy said this week. “The big challenge for Xi Jinping is he could end ‘zero COVID’ fast or he could end it safely, but he can’t do both. If you do it fast, if you just eliminated the restrictions, you’d have a big rise in cases and serious illness and death.”

Peng’s display prompted Hu to begin his own efforts in Chapel Hill. “His actions made me feel like a coward,” he said. “I was very encouraged by the fact that Peng was able to accomplish this all by himself, in a regulatory environment with strict controls on speech, under the kind of ‘stability maintenance’ system they have in mainland China.”

Some of Peng’s slogans were echoed by the protesters in China last weekend, Heritage Foundation research fellow Michael Cunningham noted. The remembrance of his example underscores the threat, from the regime’s perspective, of protest contagion.

The death of former Chinese General Secretary Jiang Zemin, who ruled in Beijing from 1989 to 2002, could offer the protesters another opportunity to flare up. Zemin laid a foundation for Xi’s heavy-handedness, Mazza and Cunningham agreed, but his death nonetheless gives Chinese people a chance to compare their prospects now to their expectations two decades ago.

“There is precedent for protests, for demonstrations to arise following the deaths of senior Chinese leaders — the most prominent example of that is 1989. … That was sort of the spark for the Tiananmen Square protests,” Mazza said. “It was a more optimistic time [under Zemin]. … The Chinese government is very aware of this, and they’re going to make that difficult.”

Its restrictive tactics are likely to succeed, according to Cunningham, who cited both the preparations the government will be able to make in light of the recent outbreak of protests and also the fading of Zemin’s reputation.

“I would say his leadership is too far removed from the people who are most likely to be willing to protest, and he doesn’t capture … their hearts and minds as previous leaders whose deaths led to protests did,” he said.

In any case, the fact that Hu, a student in North Carolina, felt anxious even about displaying flyers in Chapel Hill underscores the intensity of the Chinese Communist Party’s security measures.

“I’m a little worried about my family and friends back in China, but I’m an adult now,” he said. “If the Communist Party wants to target me, they should deal with me directly, not my family or friends.”

CLICK HERE TO READ MORE FROM THE WASHINGTON EXAMINER

Yet the intensity of those repressive efforts also points to the party’s perceptions of the risk that discontent could surge if it is not controlled.

“We’re more likely to see some harsher tactics by the regime if these folks don’t go back home and get off the streets,” said Kennedy, the CSIS scholar. “And then really, you could have a more combustible situation, particularly if there’s any significant loss of life in those kinds of conflicts. But I still think we’re far short of that is an inevitable outcome.”